The beautiful landscape of Ireland

Ireland is a small island surrounded by three seas in the North Atlantic. Its total coastline of 1,448 kilometers is separated from Great Britain in the east by the Irish Sea. To the south, the Celtic Sea lies between Ireland and the European mainland, while the rugged coastline to the west meets the roaring waves of the North Atlantic.

When it comes to Ireland's landscapes, you always hear about '40 Shades of Green' - 40 different shades of green. But there is some truth behind the cliché. Ireland is really VERY green. But that's not all. 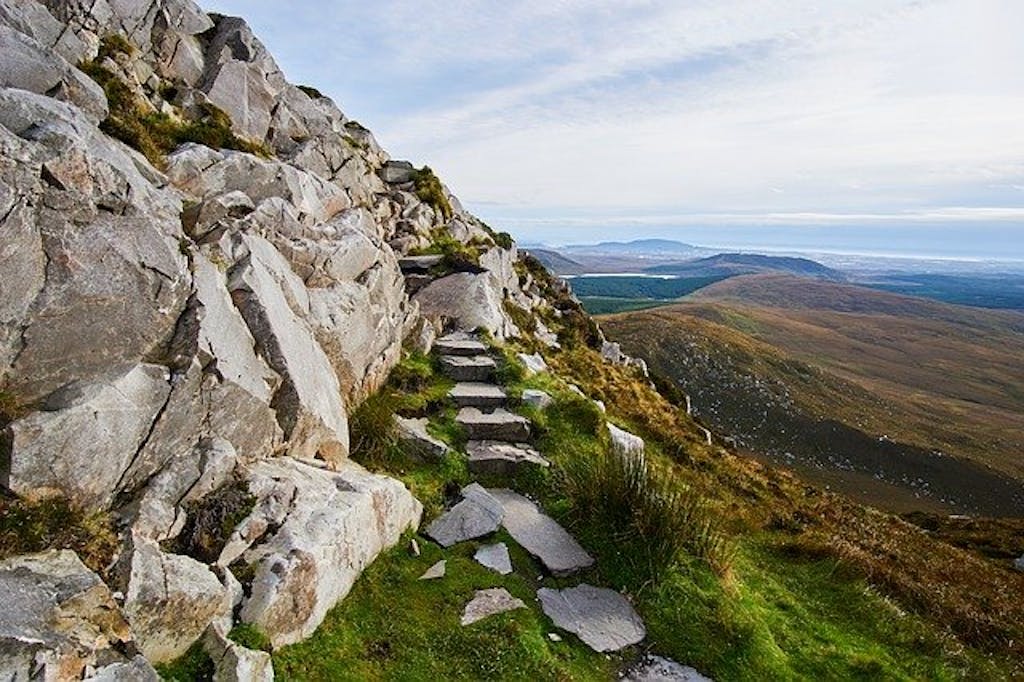 The steep cliff landscapes, clear tides and wide sandy beaches form the almost inexhaustible territory for every imaginable kind of water sport. And at the same time, they are the refuge for lively, old fishing villages with some of the best seafood cuisine in the world.

In this article we would like to talk about the beautiful nature and landscape of Ireland and show you some of the most amazing places in the country.

What characterizes the landscape of Ireland?

The first thing most people think of when it comes to Ireland is surely the endless green fields stretching along rolling hills. Or, in contrast, perhaps the spectacular cliff walls that rise steeply out of the Atlantic Ocean in the west of the island. But the fact is, despite its comparatively small area, the Emerald Isle has a colorful palette of natural spaces to offer!

Here we would like to introduce you to the special features of Ireland's unique and varied natural areas - Ireland landscapes at its best.

Something that makes Ireland unique is the fact that the flatlands are almost exclusively in the Midlands and are surrounded by numerous mountains and elevations.

Ireland's mountains cluster in the southeast, southwest, west, but especially in the north of Ireland. In contrast, a wide plain stretches from east to west through the flat center of Ireland. The mountains were formed after the last cold period 10,000 years ago. When the ice retreated, it left behind the relief of the Irish landscape that is visible today. Read more about this in Ireland's Geography. 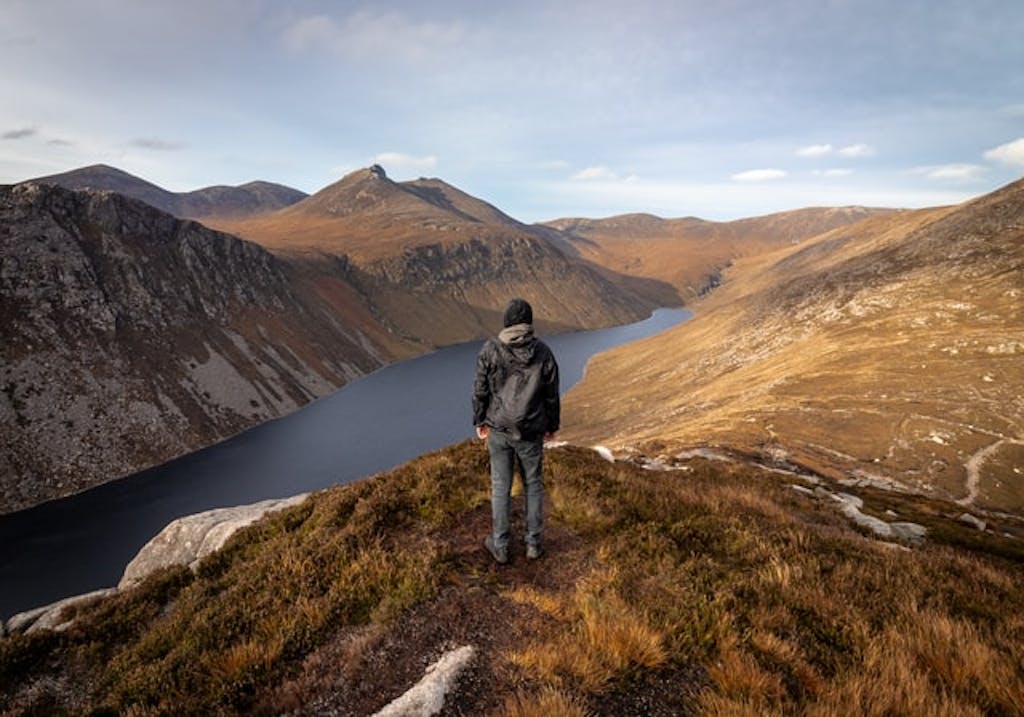 The Wicklow Mountains on the east coast are the largest contiguous mountain range in terms of area. In the southeast, various smaller mountains stretch from Carlow to Tipperary. The Comeragh Mountains in County Waterford are particularly worth mentioning.

The popular southwest of Ireland is also extremely mountainous. Both West Cork and County Kerry boast impressive mountains. Among them, Macgillycuddy's Reek near Killarney is the most famous mountain range.

Despite the numerous mountains in Ireland, only three peaks actually crack the 1,000 meter mark. Carrauntoohil is the highest mountain in the country at 1,038 meters, closely followed by Beenkeargh at 1007 meters and Caher at 1,000 meters. These three highest mountains on the island all belong to the Macgillycuddy's Reek. However, thanks to the flat plains in the Midlands, which are often below sea level, Ireland's comparatively moderate heights often appear as formidable as in alpine landscapes.

Ireland is crisscrossed by a dense network of rivers, streams and creeks. The longest river on the island is the Shannon, which meanders for around 360 kilometers from the Cuilcagh Mountains in County Cavan to Limerick. There it flows into the Atlantic Ocean in an estuary more than 102 kilometers long. 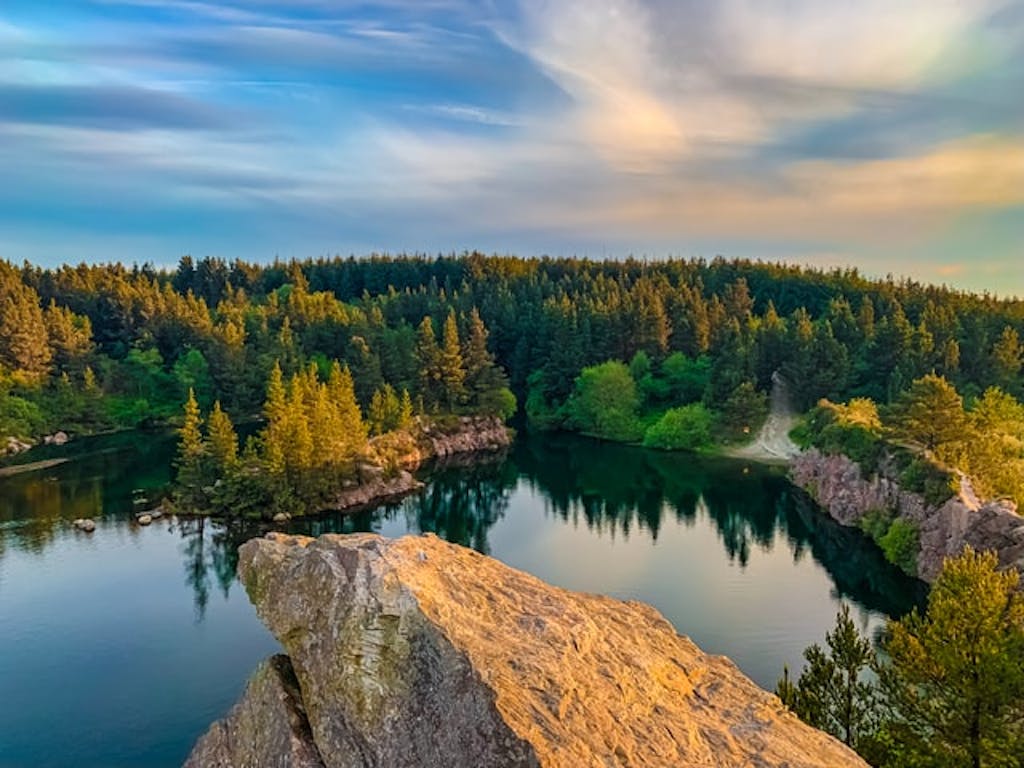 In addition to a number of freshwater lakes, there are also several saltwater lakes along the coast of Ireland. One of the most famous is certainly the tidal lake Lough Hyne in County Cork. The former freshwater lake was flooded with seawater during the Atlantic Bronze Age around 2,000 BC. Nowadays, the lake is connected to the sea and its associated tides by Barloge Creek.

Ireland's islands, so remote and quiet, also carry mythic sounds and offer wonderful hiding places for those who would like to disappear from the world beyond their vacation.

The largest island in Ireland is Achill Island off the coast of County Mayo. The 146-square-meter islet is now connected to the mainland by a bridge. This connection helps make it one of the most densely populated islands in the country. In addition to the 672-meter-high peak of Slievemore and the 688-meter-high Croaghaun sea cliffs, the island's landscape is dominated in particular by many secluded bays, sandy beaches as well as endless green hills. 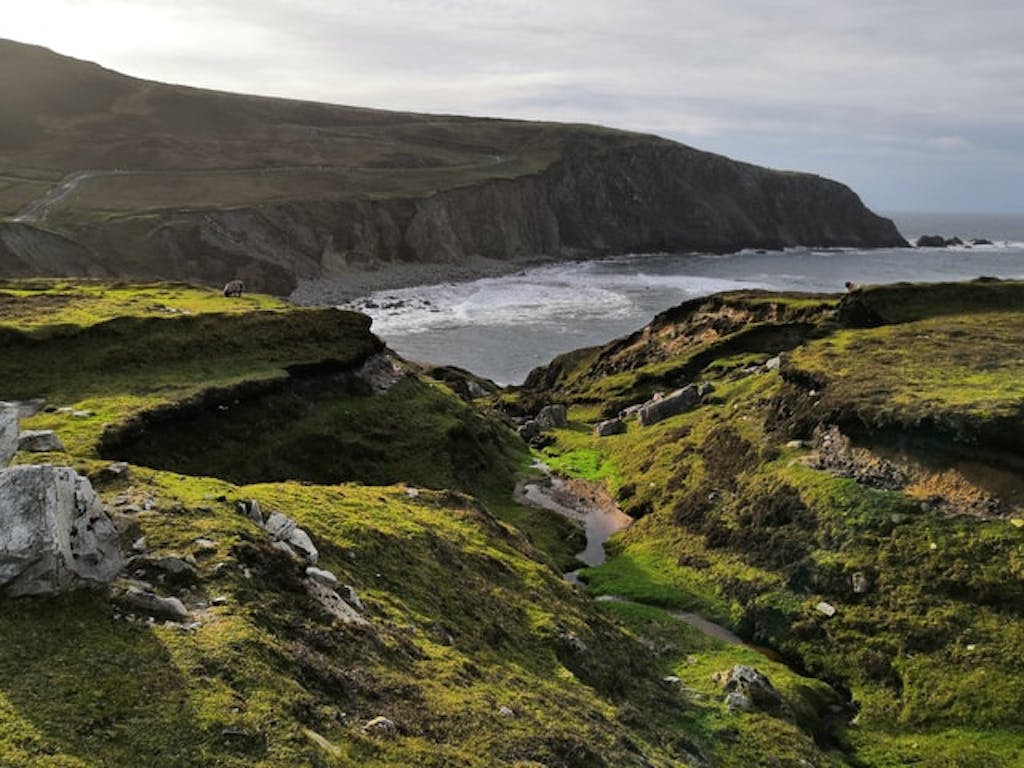 Many of the islands, including the Aran Islands as the last piece of land before the Atlantic, had no electricity until the 1970s, and to this day the traditional consciousness of the island people remains strong. For the real leap out of the world, Coney Island, Tory Island, Clare Island, Rathlin and the legendary Arans await.

The Midlands is one of the most historic regions in Ireland in terms of Celtic and Irish culture. The Midlands usually includes Cavan, Monaghan, Louth, Longford, Westmeath, Meath, Offaly and Laois. In the Midlands you will find many of the typical Celtic crosses, abbeys, castles, palaces and burial grounds. The Hill of Tara is very important for the Irish culture, it was once the seat of the High Kings. In terms of landscape, the Midlands are mainly an area with many pastures, slightly hilly with quite a few marshes/marshlands and many lakes. A relatively pristine landscape 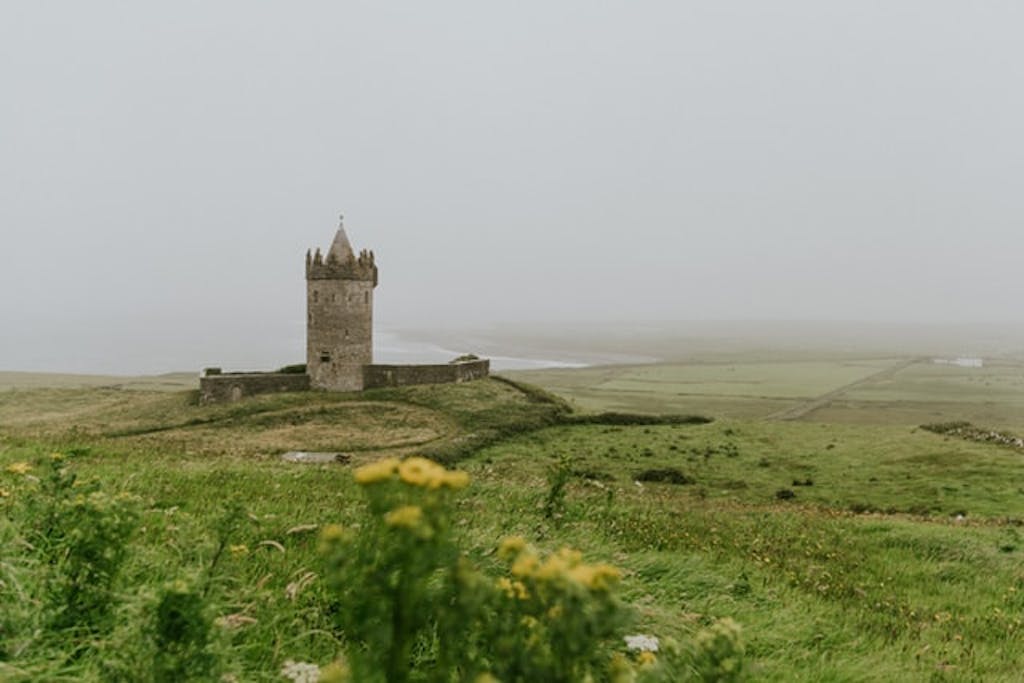 The green island is one of the most popular destinations for a road trip in Europe and convinces with numerous sights that you should definitely write on your bucket list. Besides breathtaking landscapes, you can expect mystical places and ruins that tell the history of the country.

Here we show you 5 beautiful scenic highlights that you should not miss on your trip to Ireland!

Right at the beginning we would like to introduce you to one of the most popular and at the same time most famous sights of the country, the Cliffs of Moher. The cliffs rise almost vertically out of the roaring Atlantic and reach a remarkable height of 214 meters at their highest point. 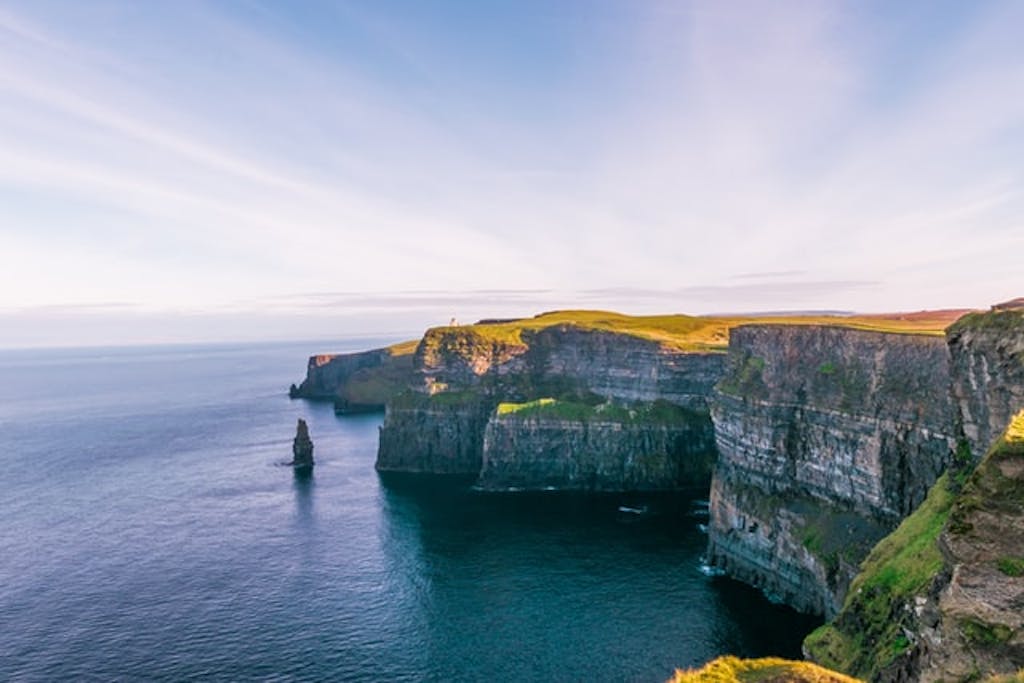 Since the sight of the cliffs is truly breathtaking, it is also not surprising that the Cliffs of Moher have already served as the location for numerous films, including Harry Potter, Hear my Song and The Princess Bride. The eight-kilometer-long stretch of coastline impresses with grassy plateaus that end abruptly here, allowing a dizzying view into the depths. With a little luck, you can observe the birds that live here in the rocky niches on the cliffs. Gulls, jackdaws, guillemots, shearwaters and puffins can be found here. For a particularly beautiful view, by the way, it's worth climbing O'Briens Tower. The cliffs are of course no longer an insider tip, which is why it is very touristy here, especially in the summer months. If you want to avoid the biggest crowds, you should come after 4 pm. Tip: At sunset, when everything is bathed in a romantic red, it is most beautiful here anyway.

Another popular attraction is the Ring of Kerry, which is not a mystical ring, but a panoramic coastal road in County Kerry.

Around 179 kilometers long, it takes you in a circle along the coast of the Iveragh Peninsula. Because of its width, buses and trucks are only allowed to drive on the road in one direction, namely clockwise. 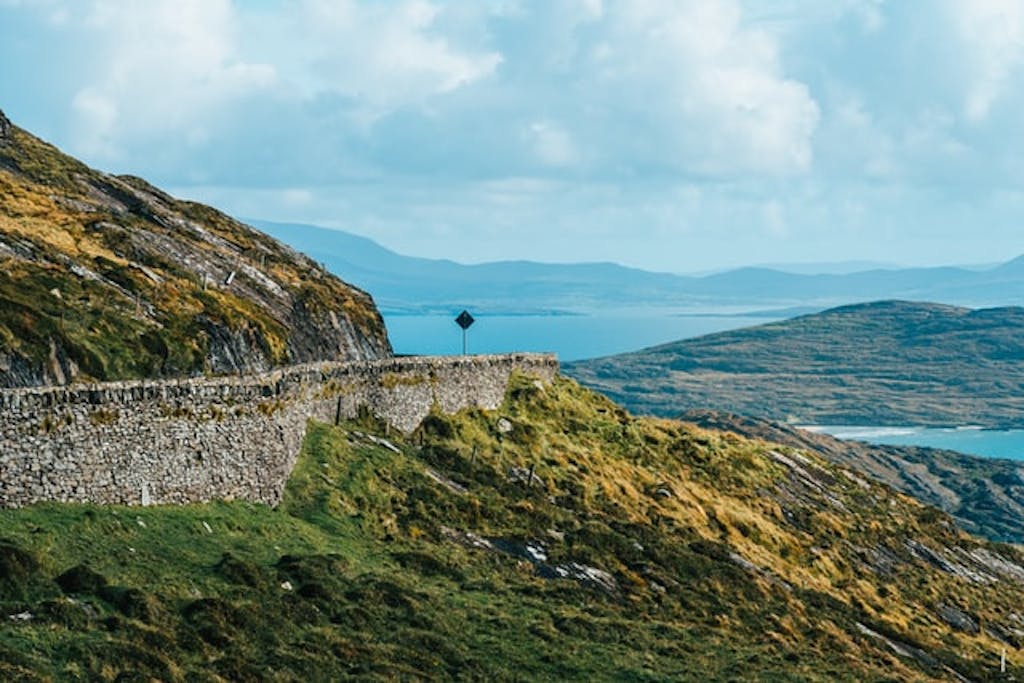 On the way you will encounter one highlight after the next as well as spectacular landscapes with fantastic views. In addition to the coastal landscape, there are numerous restored stone forts, a heritage museum and picturesque lakes in Killarney National Park. Again and again it is worth stopping and breathing in the clear air. You can take a longer break at one of the idyllic beaches and let the sea breeze blow around your nose. This is pure relaxation!

Dingle Peninsula is a peninsula in the southwest of the country and I can highly recommend a trip here. Since everything here is very spacious, it is far less crowded than on her sister, the Ring of Kerry.

Majestic mountains, rugged cliffs and numerous monuments and ruins from past times await you on the peninsula, which is almost 50 kilometers long and nine kilometers wide. In addition, you will always come across beautiful sandy beaches where you can enjoy the solitude of the country. One of the largest and most beautiful beaches in Ireland is Inch Beach. The almost endlessly long sandy beach stretches along a small headland near Annascaul. Green dunes, white sand and the deep blue water give you the feeling of being in the middle of paradise. The further you walk along the beach, the fewer people you will meet. The sound of the waves and the screeching of the seagulls are the only sounds you will hear. The beach is also very popular with surfers, so if you feel like some action, grab a board and learn how to surf. 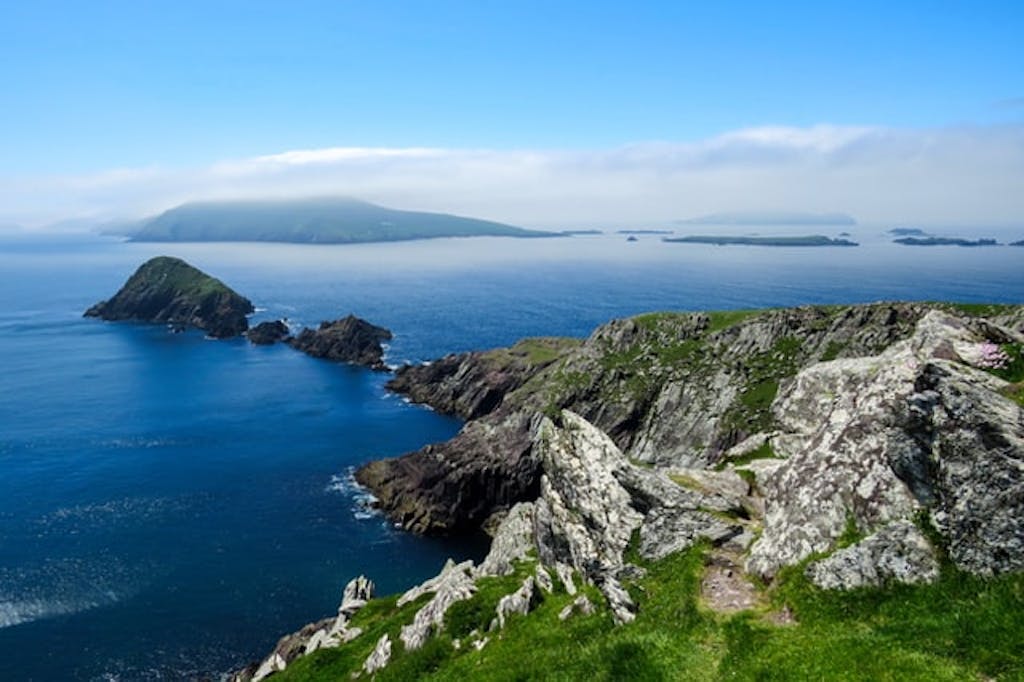 Another highlight of the peninsula awaits you with Dunquin Pier. The pier is set in unique coastal scenery, where a narrow path winds down the cliffs to the sea.  The view from above will take your breath away, I'm sure. By the way, the ferry connections to the Blasket Islands start from the pier.

In addition to a magnificent landscape of lakes, mountains, gorges and forests, there are also historical buildings worth seeing, such as Ross Castle and Muckross House. 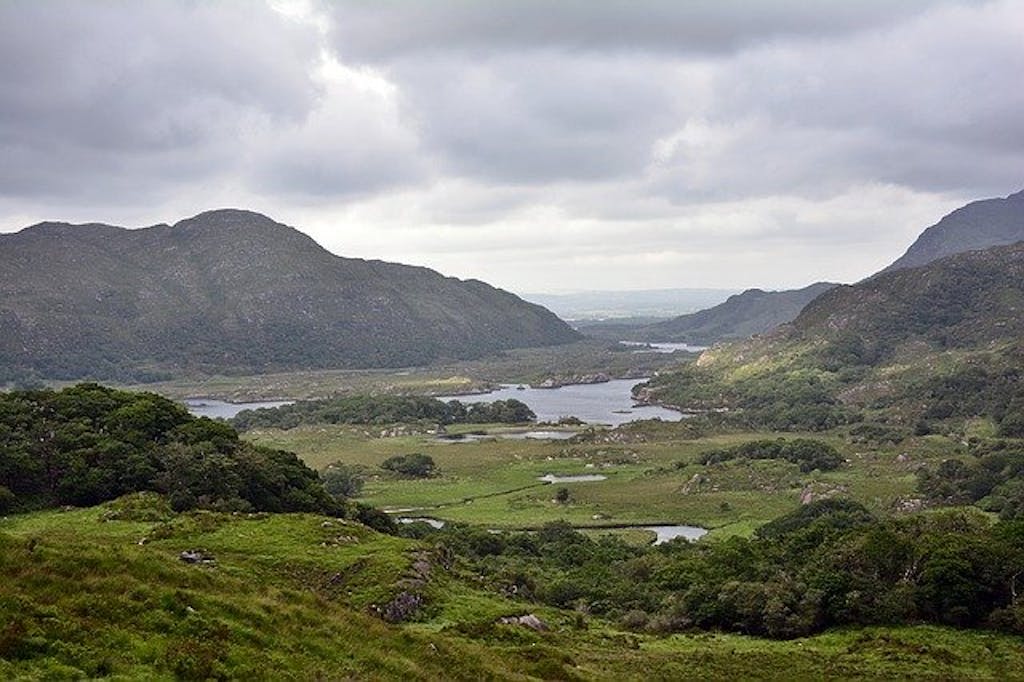 You like hiking? Then you will love Killarney National Park! It is truly a wonderful place to hike in Ireland. There are several shorter and longer hiking trails in the national park. One well-marked and easy hike leads to Torc Waterfall. The waterfall is located in the middle of the forest. The water rushes down several stone steps.

For those who want to explore the Killarney Peninsula beyond the national park, a long-distance hike on the famous Kerry Way is recommended. It forms a 214 km long circular route and leads from the town of Killarney through the national park to the coast of the peninsula. From here, you can not only enjoy a unique view of the Atlantic Ocean, but can even hike further to the island of Valentia via appropriate connecting routes near Foilmore.

Why travel to Ireland?

Rugged coasts and steep cliffs, green landscapes and numerous lakes - Ireland is a true paradise for nature lovers and offers numerous natural highlights, such as the famous Cliffs of Moher or the Dingle Peninsula. Mystical, legendary castles and palaces cast just as much of a spell as the convivial and musically influenced pub culture of Irish towns. The best way to explore the island is by car, so you can visit the numerous sights at your own pace. Here we show you how to plan your trip with Tripspi.

When traveling make sure to protect the environment and the beautiful landscape of Ireland. Our 5 tips to travel more sustainably will show you how to do that!

Have you ever been to Ireland? Then share your trip with our community and give others personal information and helpful tips!

The beautiful landscape of Japan

The beautiful landscape of Italy

The beautiful landscape of Spain