With the Transsiberian Railway through Russia - our experience

Several days in a train without interruption - for many people this is unimaginable. And for us too, the thought of a train journey lasting several days without privacy and without a bathroom was a little strange. On the other hand, we were looking forward to this extraordinary adventure - after all, the Transsiberian Railway is the longest railway line in the world, spanning two continents, 7 time zones and thousands of kilometres.

But how did we actually get the idea and how was the journey for us in the end? Here we share our experiences and adventures with the Transsiberian Railway! 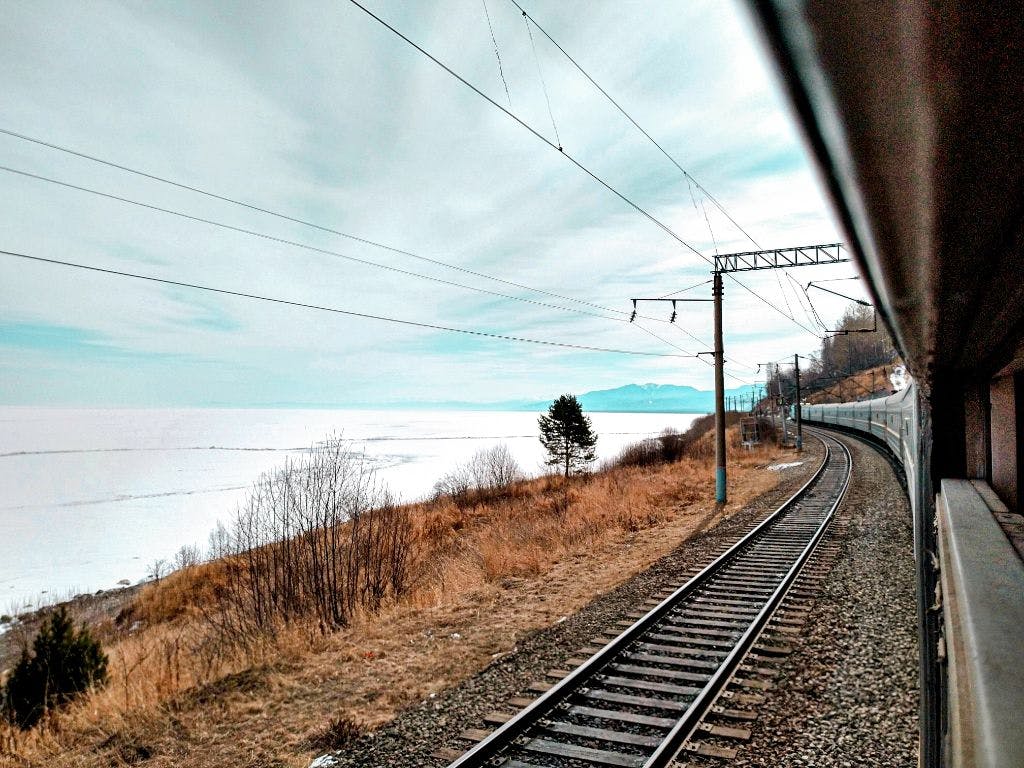 From Moscow via Mongolia to China by train

We have been thinking for a long time about taking some time off from our everyday work and going on a long journey. It soon became clear to us that we wanted to go to Asia. But that was still a bit too boring for us. A friend of ours finally gave us the idea to take the Transsiberian Railway through Russia via Mongolia to China. As a woman, however, I had less desire to spend days on the train with strangers in close proximity to each other. But my boyfriend convinced me and finally I was really looking forward to this extraordinary adventure.

In April we were ready and we started in St. Petersburg. Here we spent two days before we went to Moscow by train, because this was the starting point of the Transsiberian Railway - until our first stop in Irkutsk (at Lake Baikal) the journey took four days. We booked the second class in the train, which consisted of a separate compartment with a door and four beds.  But before we got on the train, we had to get food for four days. That meant: bag soups, bananas and oatmeal. In each wagon there was a samovar with hot water. That was really great, because that way we could make ourselves coffee and tea as well as our beloved breakfast porridge and Asian noodles. 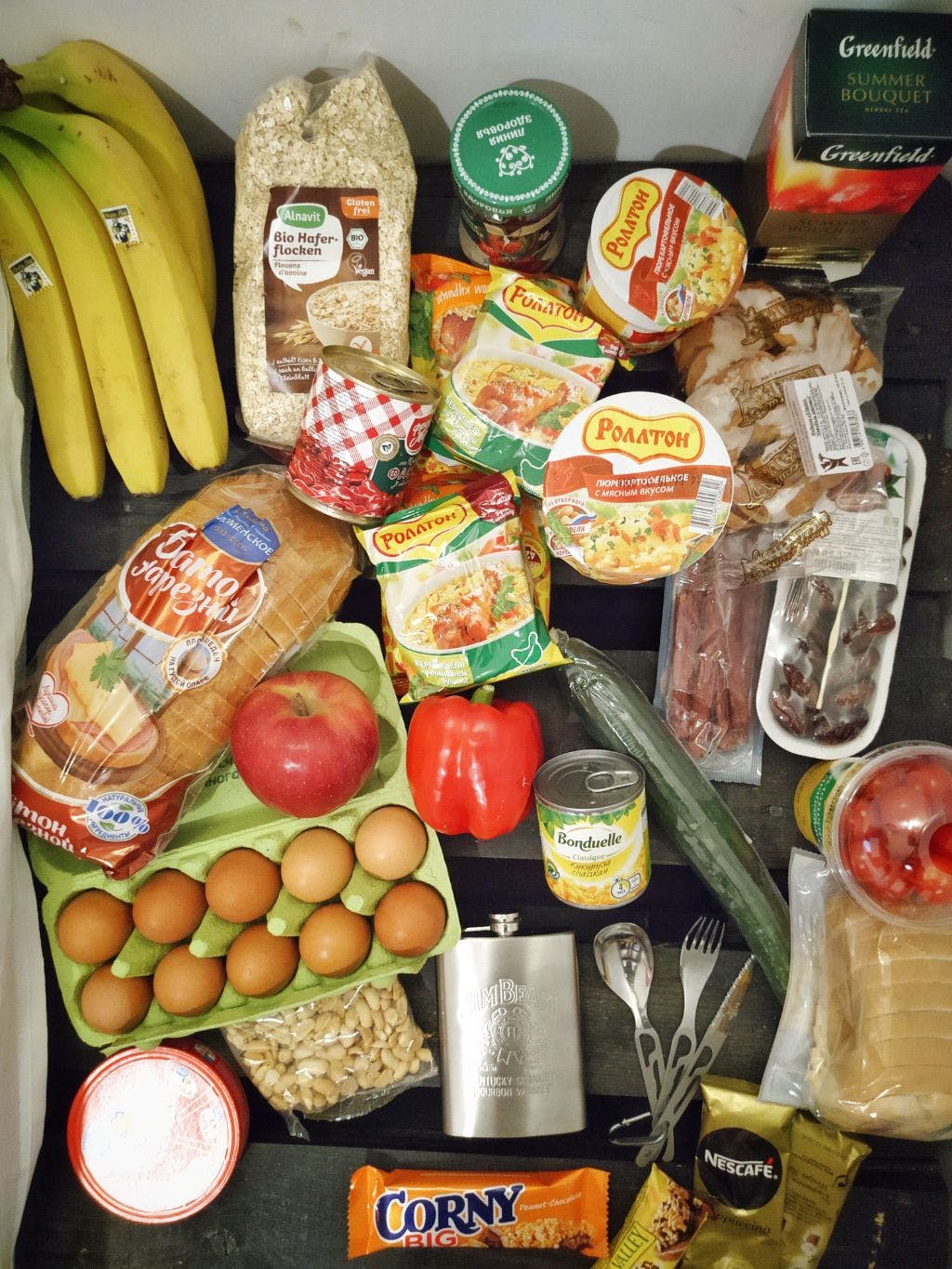 Finally it was time and we got on the train and what can I say, the trip was an experience! Well, admittedly, the toilets were a real challenge for me - as a woman you don't have it that easy. You should definitely take enough toilet paper and hygienic towels with you. Because the paper was often empty and there is hardly any water coming out of the tap to wash your hands. But that was really the only thing that would keep me from taking a second trip on the Transsib. During our four days we had a lot of time to think and philosophize but of course also to listen to music and audio books and watch some series 😉 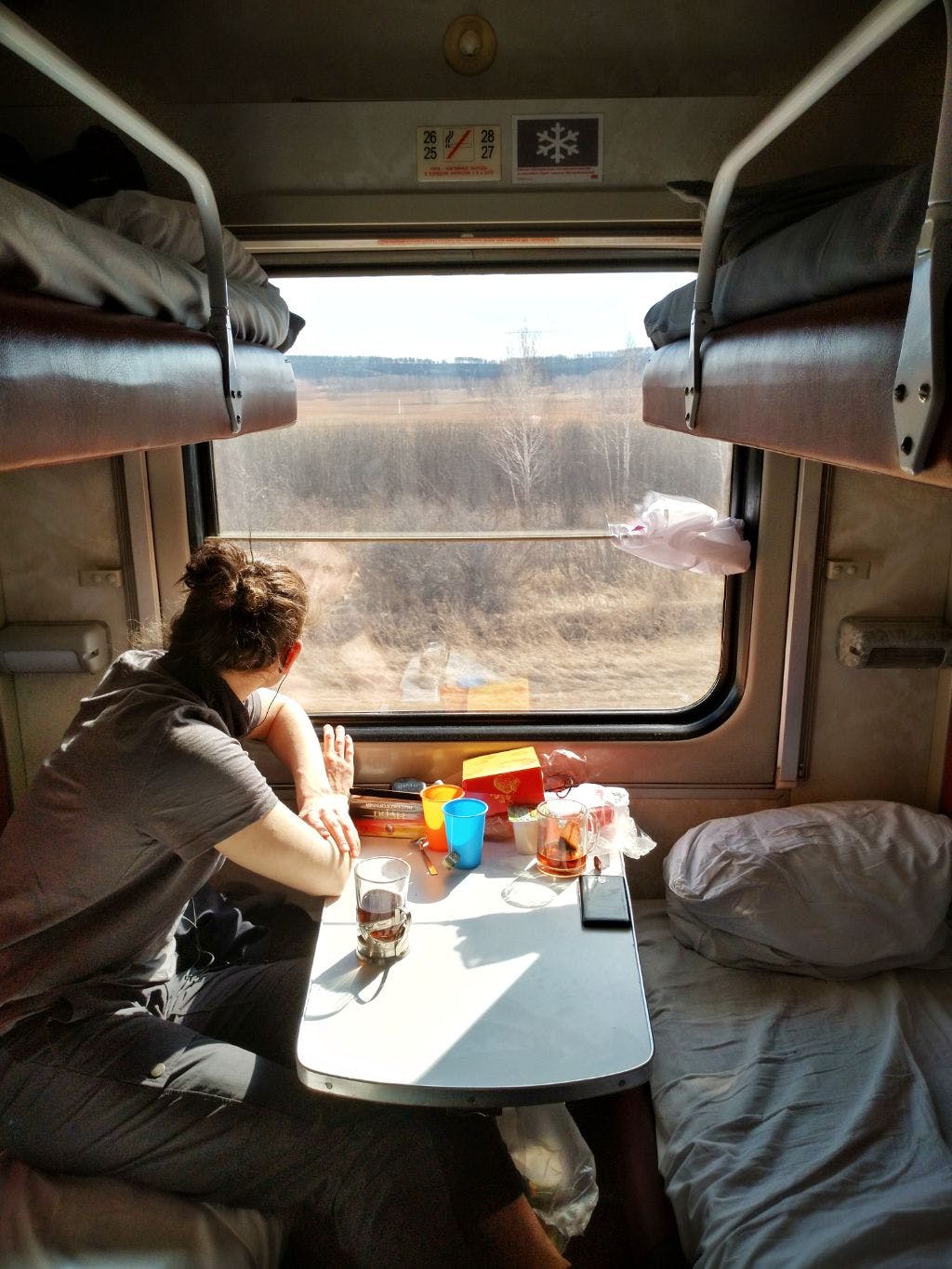 We made many nice acquaintances and also had many locals in our compartment. It was a coming and going, from an old lady visiting her family in the country, to two businessmen on a business trip, to a young Russian. In the other compartments there were also a lot of different people. There was the former Russian soldier who always bought dried fish at the station, an old lady who never felt like drinking or eating (maybe so she didn't have to go to the toilet), some backpackers who were also looking for adventure, a complete travel group including guide and of course families. The communication with the locals worked rather badly than right, but one could always communicate somehow. 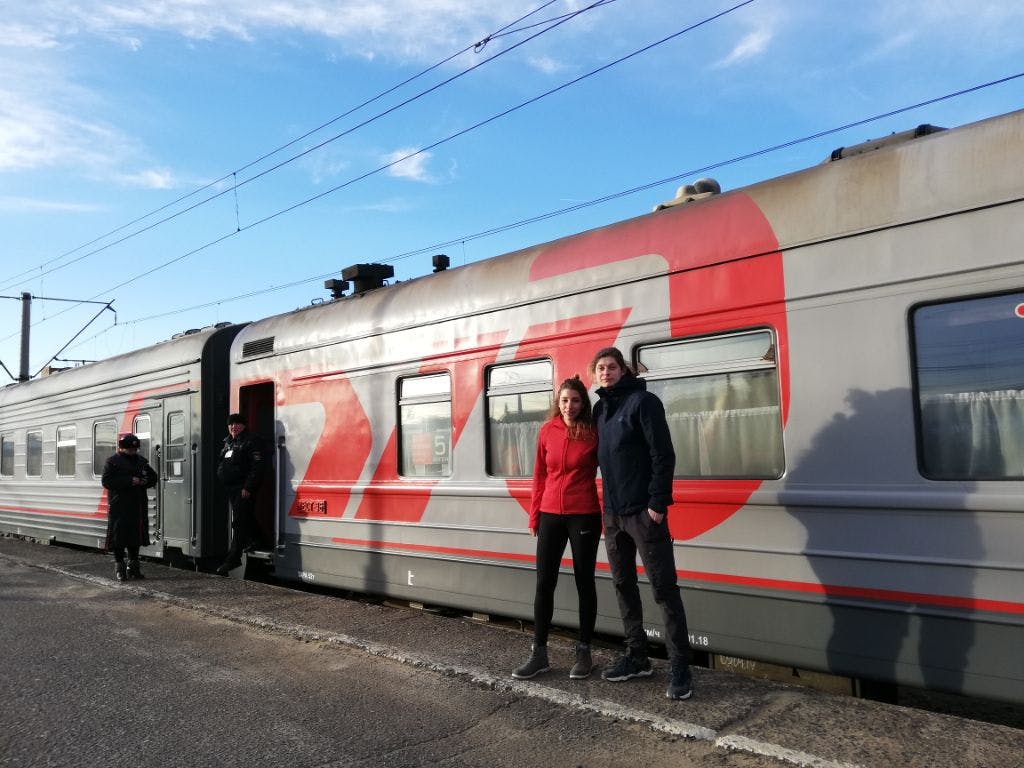 In general, you can stretch your feet quite well in between, because the train really does stop very often - sometimes for more than half an hour. We used this time to take a little walk on the platforms and to get some fresh air.

The four days went by faster than expected and finally we reached Lake Baikal. There we spent two days before we went on to Mongolia by train. This trip did not take that long and we spent only two days on the train.  In Mongolia we stopped for a whole week and explored the country. Now the last stage by train was about to begin - we went, again for two days, on to Beijing. 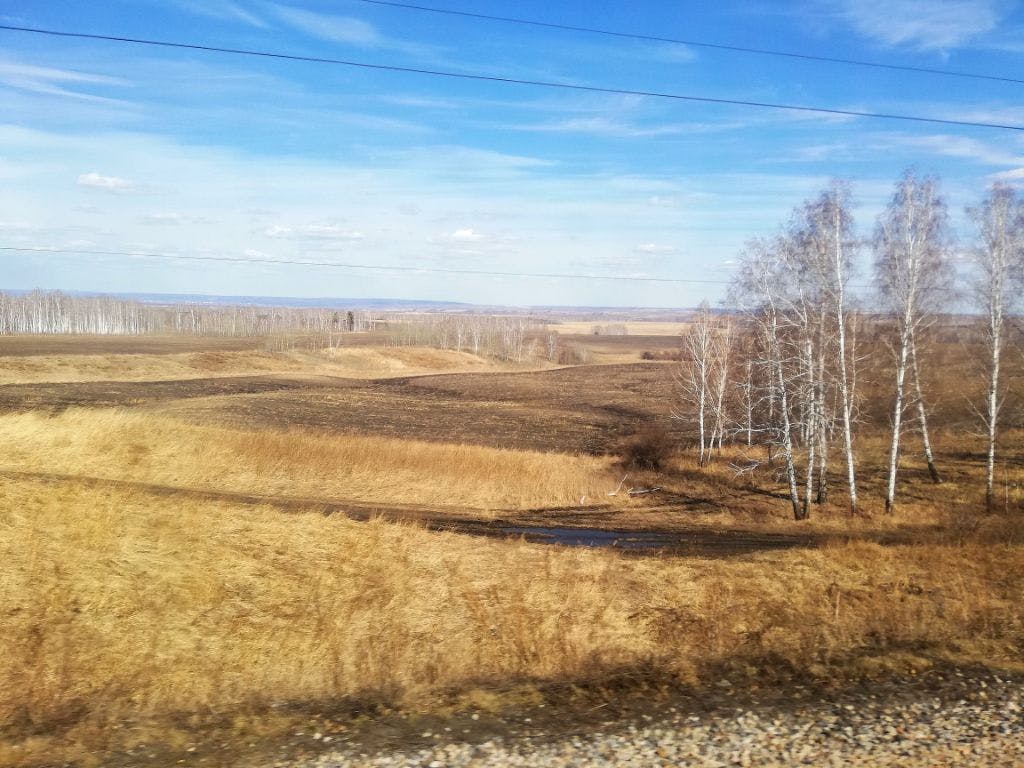 At first I thought the train in Russia was already uncomfortable, but in retrospect I must say: Russian trains are pure luxury! In the Mongolian and Chinese trains the mattresses were so hard that you could hardly move in the morning and the toilets were even worse. Now we only had one normal toilet for the whole compartment - the second one was a standing toilet and that was really nothing for me. On Chinese trains smoking is also allowed in the corridor.

Despite some inconveniences we are glad to have had this experience. We got to know many nice people and had the opportunity to experience foreign cultures first hand. Admittedly, we did not take the quite correct route of the Transsiberian Railway. Traditionally the way goes to Vladivostok. But for us it was still a great tour through Siberia and an experience we will never forget! 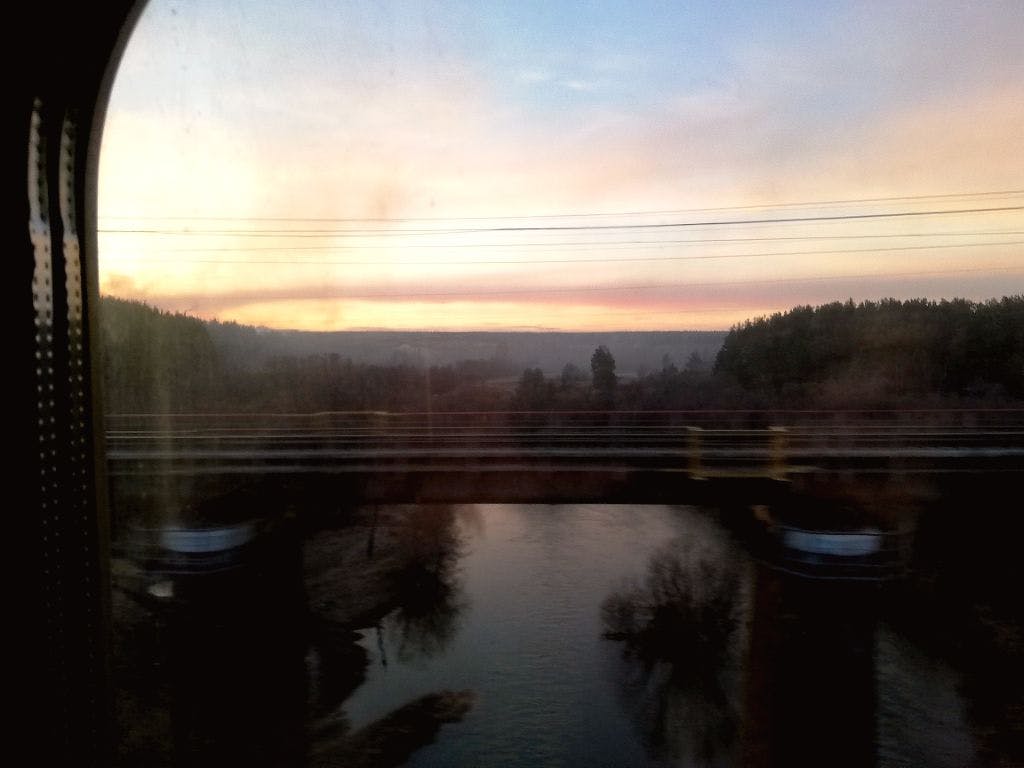 Our most important tips: